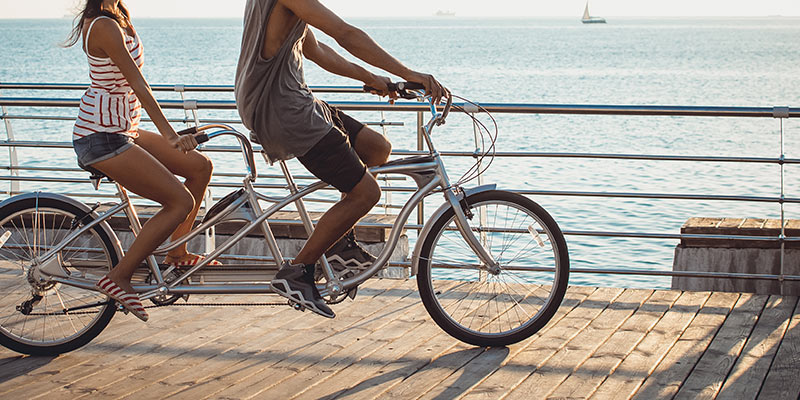 I was so excited, acting like a giddy child. I was about to have a very simple yet meaningful date with my husband. It really doesn’t take much to make me happy or make me smile but this had me feeling all sorts of warm, fuzzy feelings. I am not too sure if it was because my husband took the initiative and planned our day or if it was because this is something that surprisingly to myself, I really wanted to do. We were going to ride a tandem bike! I barely ride a bike at home. I have good intentions and sure, I have gotten on it a few times over the years but it mainly sits in our garage. The excitement that I felt as we walked up to the line to rent our bike and the anticipation that grew as we walked around the corner to retrieve the bike could not be contained.

Clear communication makes the journey easier. Without communication, there are unnecessary feelings of discomfort.

We got on the bike and took off, ready for and expecting a great adventure. It was so much fun. It was relaxing. It was beautiful seeing the different gardens. It was refreshing feeling the breeze and hearing the sounds of the waves and the splashes of the water fountains. Best of all was the fact that we were together, enjoying each other’s company and spending quality time together. It was an absolutely perfect day.

Ecclesiastes 4:9 reminds us, “Two are better than one, because they have a good reward for their toil.”

As we rode, there were times that we needed to stop and rest, sometimes the need was expressed by both of us and at other times it was just one of us. Either way, the bike could not move without both of us doing the work of pedalling together. It didn’t matter who needed it, rest came to both of us at the same time. We needed to listen to each other, value the need of one another and join each other in making it happen. In doing so we both received rest that made us both stronger together in moving forward again.

When we first started riding, we were unaware that if my husband stopped pedalling, I was forced to do the same. The bike would just freeze and even if I tried to pedal in the back, it wouldn’t. I was jerked into this reality many times. He didn’t mean to, but he forgot to communicate that he was going to stop. I had to remind him many times that he had to warn me. The bike only worked if we moved together. We learned that communication is very important. Clear communication makes the journey easier. Without communication, there are unnecessary feelings of discomfort. Lack of communication dislodges or jolts you in ways you didn’t expect. And it was only near the end of our ride that we found out it worked both ways! When I stopped pedalling in the back, he couldn’t pedal in the front either! It takes two to communicate well!

Near the end of our ride, we were both exhausted but we had to get the bike back to the starting point. We had to keep going, there was no quitting or stopping. We had a goal that had to be reached. What helped us was finding a rhythm. We paid close attention to each and this gave us strength as a unit. At some points our ride was fast paced and at other points we moved at a slower pace. At all points we moved together, pushing each other with words of encouragement.

Marriage is about being in tandem, with one another. Two are better than one. There is a great return – a great reward – as you work together.

Remember your starting point and how you felt as you began this journey – eager, expecting great things, excited about the future adventure because you were doing it together and keep going. TOGETHER. Enjoy the ride!